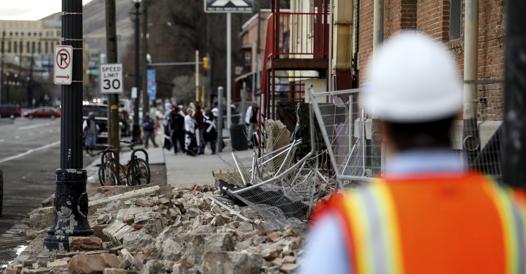 On March 18, 2018 at 7:09 AM local time a normal faulting Mw5.7 earthquake occurred near the town of Magna, Utah, about 18 km west from the active Wasatch Fault Zone (WFZ), at a depth of 11.7 km. The WFZ is located at the boundary between the extensional Basin and Range province to the west and the more stable Colorado Plateau to the east. It extends north-south for about 350 km, from southern Idaho to central Utah. Based on geomorphic, structural, and paleoseismological studies, the WFZ has been divided in 10 segments, 6 of which (Brigham City, Weber, Salt Lake City, Provo, Nephi, Levan) define the central WFZ (Figure). This Mw 5.7 event occurred at the same latitude of the Salt Lake City segment in a region characterized by distributed faulting and several synthetic and antithetic faults (e.g., West Valley Fault Zone, Great Salt Lake Fault Zone). With the current available information, it is difficult to identify the fault responsible for this event.

Verdecchia and coauthors used an approach based on physical (coseismic + postseismic Coulomb stress changes) and statistical (probability calculations) to determine if the stress changes due to the youngest paleoevents have significantly modified the present-day probability of occurrence of large earthquakes on each of the segments of the central WFZ. The authors show that regardless of any uncertainties in this approach, Coulomb stress changes strongly affect the time-dependent probability of a large earthquake on the Brigham City, Salt Lake City, and Provo segments. These results indicate that the seismic hazard connected with single-segment ruptures on the central WFZ might be underestimated, if the effects of stress changes are not considered.

Valentini and coauthors assess the impact that the Wasatch fault segmentation model has on seismic hazard by evaluating the time-independent long-term rate of ruptures on the fault that satisfy fault-slip rates and paleoseismic event rates, adapting standard inverse theory used in the Uniform California Earthquake Rupture Forecast (Vers. 3) and implementing a segmentation constraint in which ruptures across primary structural complexities are penalized.